Leaders of Métis and Inuit delegations called on Pope Francis, during and after private meetings with him on Monday, to bring perpetrators of abuse at Canada’s residential schools to justice, saying the Catholic Church must stop shielding those who committed crimes and actively assist in holding them to account.

The two meetings with the Pope – one each for the Métis and Inuit delegations – were the opening acts in a week of talks in Rome between Catholic authorities and Indigenous leaders from Canada. On Thursday, First Nations delegates are scheduled to hold their own private meeting with the Pope, who will then hold a general audience with all three Indigenous groups on Friday.

Speaking after Monday’s hour-long meetings, which took place in the Apostolic Library at the Vatican, the Métis and Inuit delegates said the Pope was welcoming, thoughtful and engaged. They emerged convinced he was becoming more aware of Indigenous peoples’ suffering in the era of Catholic-run residential schools. But he did not apologize to them for the abuses.

Inuit leader Natan Obed, president of the Inuit Tapiriit Kanatami, asked the Pope to intervene personally in the case of an Oblate priest, Johannes Rivoire, who has been accused of sexually abusing children in several Inuit communities.

Father Rivoire is a French national who fled to France in 1993 after working in Nunavut starting in the 1960s. In 1998, the RCMP issued a warrant for his arrest for indecent and sexual assault, but France does not extradite its citizens. Canadian authorities cancelled the warrant in 2018.

Late Monday, Nunavut RCMP confirmed to The Globe that they have charged Father Rivoire with sexual assault and issued a new Canada-wide warrant for his arrest, after results of an investigation that stemmed from a complaint they received last September about sexual assaults that happened about 47 years ago.

“It is such a heartbreaking reality that some people who should have been brought to justice decades ago have not seen justice, and those who have been abused and those victims have sometimes died before they have seen justice,” Mr. Obed said at a news conference after the meeting with the Pope.

Calgary Bishop William McGrattan, who is vice-president of the Canadian Conference of Catholic Bishops (CCCB), expressed support for justice in the case of Father Rivoire.

“The church wants to work with the relevant justice authorities, whether they be international or Canadian. And if there are allegations that someone has committed these abuses, they need be brought to justice,” Bishop McGrattan said. “And the church should not stand in the way but assist those who have been victims to seek justice.”

He said the Oblates have agreed to meet with Mr. Obed this week in Rome, and that they will discuss the case with him. 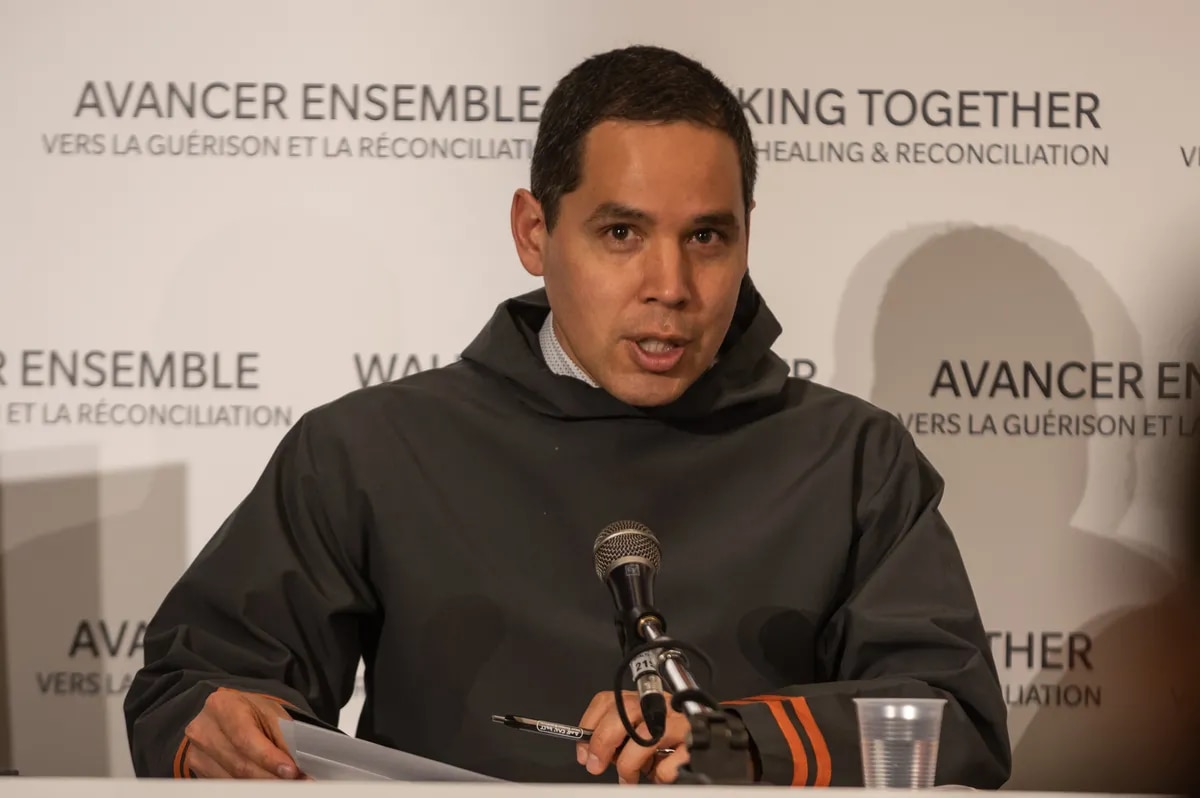 Métis National Council president Cassidy Caron said the Pope did not speak a lot during the Métis meeting; He appeared absorbed in delegates’ stories of residential-school abuses.

The groups exchanged gifts with the Pope. The Inuit delegation gave him a sealskin rosary case, Inuit carvings and a handmade sealskin stole, which he tried on. At the end of the meeting, the Pope gave the delegates oval golden medallions, carved with images of the Mother Mary, Jesus and the Pope’s crest. The Métis group gave him a pair of handmade red moccasins with a beaded floral pattern.

“I think people were very thankful for not only the Pope’s interest in what he received but also his token of appreciation to the delegates,” Mr. Obed said.

Ms. Caron said the Métis delegates received no information about whether the Pope would apologize for the decades of abuses at residential schools. The CCCB apologized last year.

“We shared a lot with him,” Ms. Caron said. “And I think for anybody, listening to the stories coming directly from our survivors, it’s a lot to digest. It’s a lot to translate, even with the language barriers that we face today. … I hope that he takes the time between now and [Friday] to translate those words from his head into his heart.”

The Métis delegation asked the Pope for unfettered access to church documents relating to residential schools, something Ms. Caron said delegates would address again in the final audience on Friday. Some of the records are held by religious orders, such as the Oblates. The Métis and Inuit delegations pose for photos with the Pope and church representatives. Vatican Media/Reuters

The meetings were arranged by the CCCB and Indigenous groups after last summer’s news that First Nations had discovered unmarked graves at former residential school sites in Kamloops and other locations across the country. The CCCB financed the trip to Rome.

The meetings are part of a Truth and Reconciliation process that has, over many years, exposed inhumane treatment at residential schools.

The federal government has estimated more than 150,000 Indigenous children were sent to about 140 government and church-run institutions in Canada between the 1880s and 1997. Many endured unspeakable abuses at the hands of priests and nuns, including punishment for speaking their Indigenous languages. The National Centre for Truth and Reconciliation said last June that 4,117 children are known to have died at the schools.

After the Métis audience with the Pope on Monday, the eight members of the delegation, led by Ms. Caron, crossed St. Peter’s Square, while two young Métis fiddlers played The Red River Jig.

“When we invited Pope Francis to join us in a journey for truth, reconciliation, justice and healing, the only words he spoke back to us in English – he repeated ‘truth, justice and healing,’” Ms. Caron said. “And I take that as a personal commitment. So he has personally committed to those actions.”

Ms. Caron also called for access to cultural Indigenous artifacts that are held in Rome and at the Vatican, and for compensation for residential-school survivors, many of whom, she noted, live in poverty.

The Catholic Church committed to pay restitution to survivors, as part of the 2006 Indian Residential Schools Settlement Agreement, but it ultimately collected only a small portion of a $25-million pot of money it had promised to raise. The CCCB announced a new $30-million campaign last year.

Ms. Caron said the Vatican is one of the wealthiest states in the world and that “there should be no question why these funds have not been paid to our people yet.”

And she called for justice for perpetrators of abuse at residential schools. “We know that perpetrators are still out there. Those who committed these crimes against our children are still living, and we need commitment from the Catholic Church to not shield those alleged perpetrators.”

For Mr. Obed, the calls for action are about holding the church accountable. “This is an ongoing relationship between a global power in this particular place and 51 small communities in Inuit Nunangat and 65,000 Inuit in Canada,” Mr. Obed said. “We are still in search of the lasting respect, and the right to self-determination and the acknowledgment of that right by institutions that have harmed us.”

All three Indigenous delegations are asking for the Pope to make a formal, public apology on Canadian soil. They are also hoping to hear an apology from him at the end of this week.

“What happened was a crime against humanity,” Mitchell Case, a community-based historian, educator and Region 4 Councillor for the Métis Nation of Ontario, told reporters. “Those residential schools were set up to remove us from the land so that Canada could claim everything.”

Angie Crerar was one of three elders who spoke with the Pope during the Métis delegation’s private meeting. She called it “the most wonderful day I ever had all my life.”

Struggling to find the words to describe the experience, she said Pope Francis was “so kind” and that despite the language barrier she felt a connection with him. “His smile, and his reaction, his body language,” she said. “And I just felt, man, I just love this man.”

Ms. Crerar said she told the Pope about her 10 years at a residential school in Fort Resolute, NWT, which her two little sisters also attended. “We lost everything. We had nobody. Nobody cared. One thing we have now is our pride,” she said. “They did not break us, we’re still here, and we intend to live here forever.”

She said hearing an apology from the Vatican is not important to her, and that she will find closure when the children who didn’t make it home from residential schools are identified. “I want to get our kids home,” she said. “Then I will celebrate.”

With a report from Patrick White

Residential schools: More from The Globe and Mail

In the 1950s, Kaska Dena children aided a lone Mountie in catching a sexual predator at their residential school in northern B.C. – but the Catholic Church’s intimidation of witnesses derailed the trial. The Globe and Mail’s Patrick White investigated and spoke with The Decibel about what he found. Subscribe for more episodes.

Darrel J. McLeod: The Church took so much. It should start giving back

Tanya Talaga: From war to Indigenous rights and climate change, everything is connected

The Catholic Church in Canada is worth billions, a Globe investigation shows. Why are its reparations for residential schools so small?

How the Church was freed from obligation to residential school survivors