A heat wave is blazing through the United Kingdom and several European countries, sending temperatures soaring above 40 degrees in some cities. In the U.K. the extreme heat has closed schools, halted rail services, melted airport runways, and even forced some hospitals to cancel surgeries because operating rooms were too hot. Temperatures are also rising across Europe, fuelling forest fires and leading to hundreds of heat-related deaths in France, Portugal and Italy. Lengthy droughts are exacerbating wildfires and making them even harder to contain.

Although the heat wave is unprecedented for Britain, a country with typically temperate weather, scientists warn that extreme heat could become the norm in more cities around the world as a result of climate change.

How is the heat wave affecting the United Kingdom?

On Friday, the U.K.’s official weather service, the Meteorological Office, issued its first ever red warning for extreme heat. The most serious alert level that warns “dangerous weather is expected” and is likely to bring “risk to life.”

The heat wave has disrupted services across England. Schools were closed and train services were cancelled on Monday after operators cautioned that the heat could cause tracks to bend or buckle. Some flights were suspended at London’s Luton Airport so engineers could repair the runway “after high surface temperatures caused a small section to lift.” London has also faced a surge in fires because of the heat. London Fire Brigade listed 10 major blazes across the city on Tuesday and urged people to stop having barbecues.

Many homes, schools and small businesses do not have air conditioning in Britain, an indication of how unusual these high temperatures are for the country.

Studies have shown that “the likelihood of extremely hot days in the U.K. has been increasing and will continue to do so during the course of the century,” said Nikos Christidis, a climate scientist at the Met Office. He added that “the chances of seeing 40 C days in the U.K. could be as much as 10 times more likely in the current climate than under a natural climate unaffected by human influence.”

How is the heat wave affecting other parts of Europe?

Temperatures across Europe are soaring, with extreme heat broiling France, Spain, Portugal, Italy, Poland and other parts of Eastern Europe.

In Lousa, Portugal, the thermometer topped 46 last week, while heat alerts have been posted throughout France and Spain as temperatures stayed around 40 for days. In Amsterdam, temperatures were expected to reach 39 on Tuesday as municipal workers sprayed water on some of the city’s metal bridges to prevent them from expanding.

A deadly combination of drought conditions and extreme heat are stoking wildfires in many European countries. At least two people have been killed in blazes in Spain; in southwestern France, thousands of people had to be evacuated from their homes because of forest fires. One of the blazes, in a woodland area south of Bordeaux, is suspected to have been started deliberately and a man has been detained for questioning.

The World Meteorological Organization said that Europe’s heat wave was expected to peak on Tuesday, but temperatures may remain high into next week. 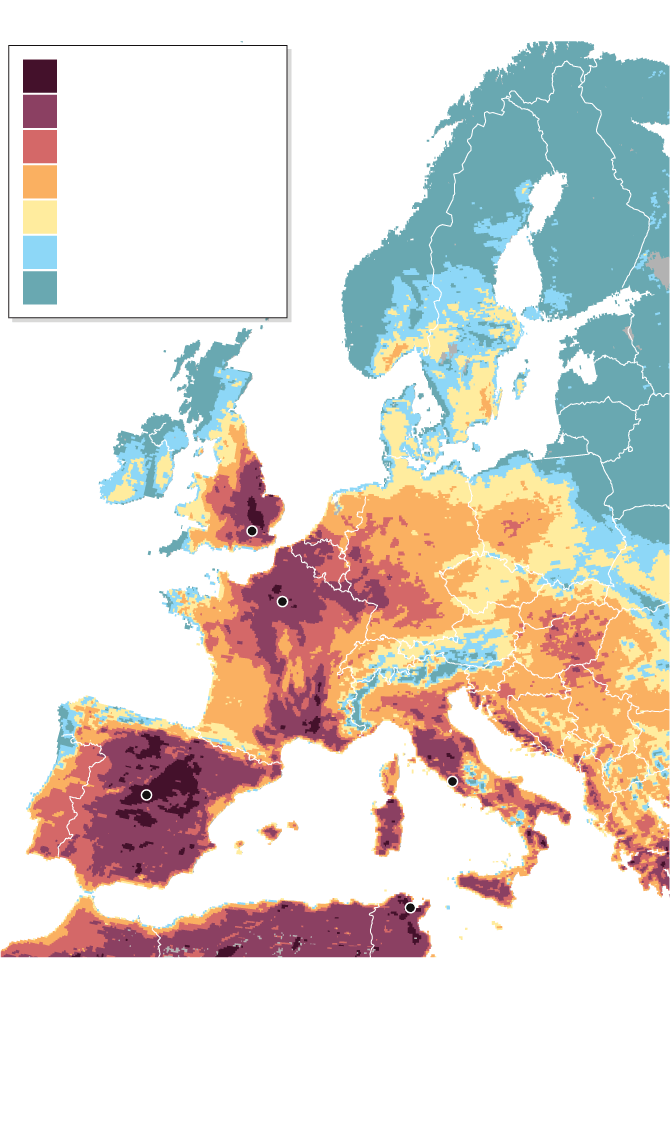 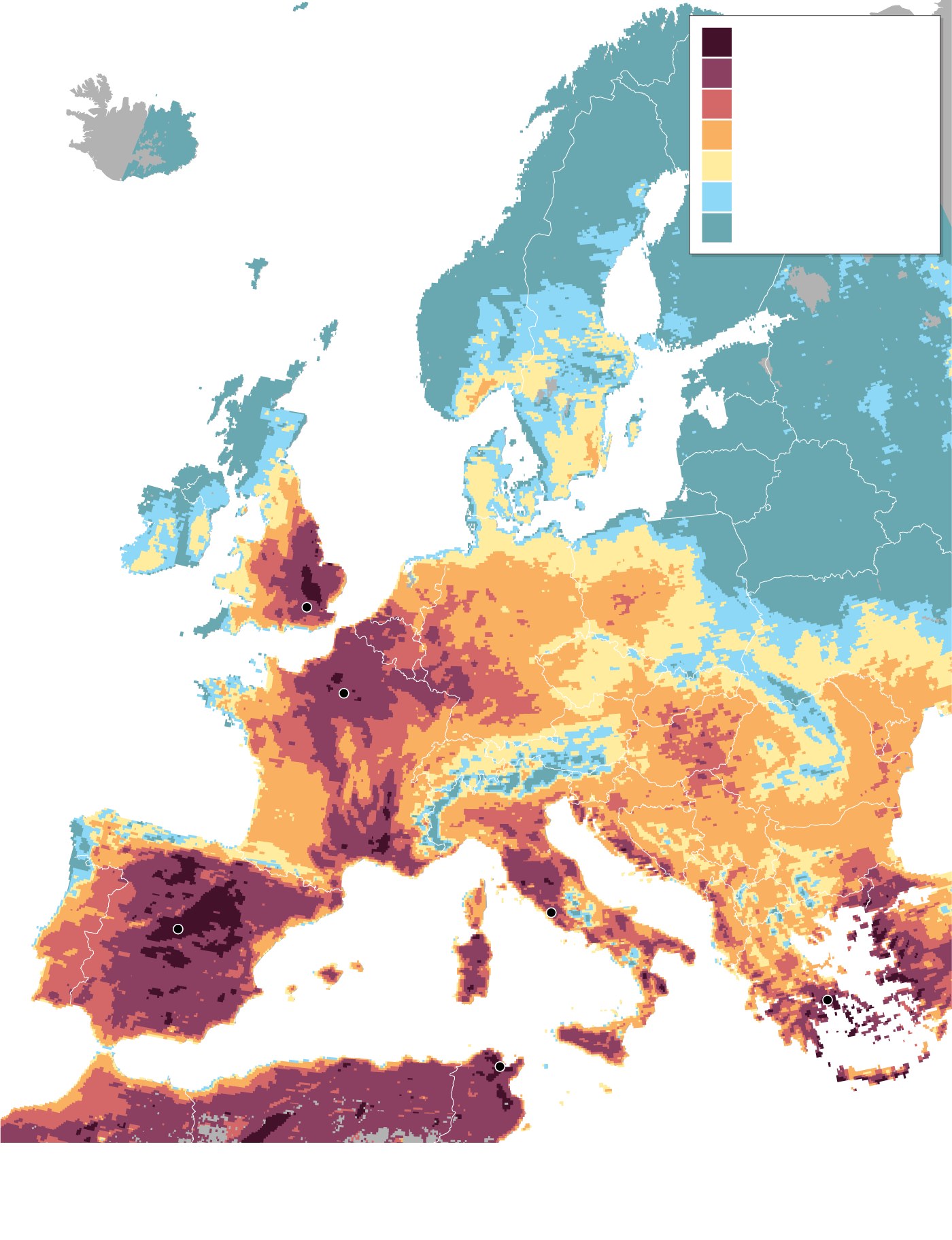 How many deaths have been related to the heat wave in Europe so far?

In Portugal and Spain, nearly 750 heat-related deaths have been reported during the heat wave. And at least six people were reported to have drowned across the U.K. in rivers, lakes and reservoirs while trying to cool off, according to the Associated Press. Officials at WMO also warned that they expect more deaths among the elderly and those with pre-existing health conditions.

Climate scientists warn that heat waves are becoming more intense, frequent and longer as a result of human-induced climate change. “Every heat wave that we are experiencing today has been made hotter and more frequent because of human-induced climate change,” said Friederike Otto, a senior lecturer in climate science at Imperial College London. “We know this now after decades and centuries of climate research.”

In a recent report by the Intact Centre on Climate Change at the University of Waterloo, experts called on the Canadian government to consider extreme heat as a natural disaster, since it has proven deadlier and more common in Canada than other threats such as earthquakes, floods and wildfires.

How does climate change cause wildfires?

Climate change is leading to record high temperatures and dryness, two factors that can increase the risk of severe wildfires. “The heating of the planet is turning landscapes into tinderboxes, while more extreme weather means stronger, hotter, drier winds to fan the flames,” a landmark UN report from February, 2022, says. The report found that extreme wildfires are increasing in frequency and intensity around the globe, driven by a combination of climate change and land-use changes. By 2030, wildfires will increase by 30 per cent, and by the end of the century, they will increase by 50 per cent.

The costs of wildfires are often counted in terms of human lives and infrastructure losses, but the toll is much broader, the report notes. Exposure to smoke above safe levels can cause chronic impacts that reduce life expectancy and increase pressure on public-health systems. Wildfires contribute to a climate change feedback loop: huge quantities of greenhouse gases are emitted into the atmosphere, spurring more warming and more drying.

What are the health risks of extreme heat?

How does the human body respond to rising temperatures? This one-of-a-kind lab in Ottawa is trying to find out

In Canada’s biggest cities, vulnerability to rising temperatures may depend on your neighbourhood