More than any other in Canadian hockey history, Paul Henderson’s winning goal a half-century ago against the Soviet Union remains frozen in time. He is 79 now and still gets asked about it nearly every day.

“If I am out in public, that is the way it is,” Henderson says.

With 34 seconds remaining in the eighth and final game, he snuck a puck past Vladislav Tretiak, a future Hall of Fame goalie, to clinch the 1972 Summit Series. Sept. 2 marked the 50th anniversary of the first contest between the geopolitical and sporting rivals.

What transpired between them was so much more than an international hockey series. It took place during the Cold War and was seen as a battle between democracy and communism and Western values and the Eastern Bloc.

“I’m not too proud of it, but there’s no doubt in my mind that I would have killed those sons of bitches to win,” Phil Esposito, a member of the Canadian team, once told The Globe and Mail. The 80-year-old is a member of the Hall of Fame and a broadcaster for the Tampa Bay Lightning.

An estimated 13 million out of 22 million Canadians watched Game 8 on TV from Moscow. Classes were scuttled so children could watch at school. Businesses shut down so employees could take in the action from home. During an Air Canada flight between Los Angeles and Toronto, flight attendants broke out bottles of champagne when the final score – 6-5 – was announced. After losing three of the first five games, Canada won the series 4-3-1.

“We did the cha-cha-cha and the bunny hop in Red Square that night,” said Harry Sinden, then the Team Canada head coach. He is 89 now. “Lenin must have been turning over in his tomb.”

Henderson scored seven times in the series but is mostly remembered for the last goal. Relatively few people today know that he also had a good career. He scored 376 goals and had 384 assists in 19 seasons in the NHL and WHA. He retired in 1981.

The Summit Series may not have changed the world, but it changed what it meant to be Canadian

“Henderson had goals in each of the last three games and won all three,” Bobby Clarke, one of his Team Canada linemates, said this week. A member of the Hockey Hall of Fame, Clarke is 73 and the senior vice-president of the Philadelphia Flyers. “You can get lucky once or twice, but not three times.

“He was a scorer who could really skate and really shoot. When he got the opportunities he could be deadly.”

Henderson spent seven seasons with the Maple Leafs and in 1971-72 had a high of 38 goals. But while well regarded, he was not one of the marquee players on a Team Canada roster that included not only Esposito and Clarke, but Yvan Cournoyer, Marcel Dionne, Ken Dryden, Rod Gilbert, Pete and Frank Mahovlich, Brad Park and Serge Savard. Bobby Orr missed the series because of a knee injury and Bobby Hull was not eligible because he had signed with the Winnipeg Jets of the WHA.

“It was the biggest thrill of my career to be named to the team,” Henderson said this week. “I was invited, but I knew I was a long shot to make it.”

The eight-game series was contested over 27 days. The first four games were played in Montreal, Toronto, Winnipeg and Vancouver, the next four at Moscow’s Luzhniki Palace of Sports.

From the beginning it was a grudge match. The Soviet roster was comprised of members of the Red Army team and had won nine successive world championships and three Olympic gold medals in a row. The Canadian players had not been allowed to compete against them because they were considered professionals, and the Canadians were annoyed at the Soviet’s amateur status and suspicious of their pedigree.

“I was sick and tired of watching the Russians win the Olympics with a Red Army team that was more professional than we were,” Henderson said. “We hated the Russians with a passion. We shouldn’t have hated them, but hated their system.

“I met some of them afterward and they were great guys.”

“We knew they were good but look at the firepower we had,” Henderson said. “I thought if their goaltenders had a good game and ours had a bad game they might tie us.

“I felt that we would overpower them. That proved to be a fallacy pretty fast.”

The Canadians rebounded to win Game 2, then blew two, two-goal leads in a Game 3 that ultimately finished tied, and played poorly in a Game 4 loss. After that game, fans in Vancouver booed them off the ice.

“Before the series started there was an arrogance among all of us,” Clarke said.

“We were told they were not going to be good so that led to even more arrogance. But after we got our asses kicked, it didn’t take long to realize we were no better than they were. It was a shock.”

Team Canada and its entourage then flew from Toronto to Stockholm and played two exhibition games in Sweden on an Olympic-sized rink, which is longer and wider than those used in the NHL. From there, the team travelled to Moscow.

“I have a vivid memory,” Henderson said. “We arrived at night and our bus ride from the airport to the hotel there were no houses, just apartment buildings. You could see into them and there was just a bare bulb hanging from wires in the ceiling.

“It was as drab as drab can be. It was an eye-opener to go there. If I ever owned a company I always said I would take my employees there for three days. After that they would have been grateful to have been born in Canada.”

The Canadians brought 800 steaks along with them – only to have most hijacked by the Soviets. Players repeatedly received calls in their rooms in the middle of the night to interrupt their sleep, had practices delayed, had no hot water for showers and found their towels missing afterward.

Approximately 3,000 fans travelled from Canada to Russia and created a ruckus as they supported the visiting team. In contrast, the Soviet crowd was subdued, mainly because it was mostly made up from Communist Party officials who had little interest in hockey.

As the Summit Series turns 50, hockey finds itself at a crossroads

Ceremonies were held before Game 5, during which Esposito did a face-plant when he skated over a flower stem being held by a young Canadian girl. “I skated up and fell on my ass when they introduced me,” Esposito told The Globe and Mail years ago. “I got up and bowed and blew a kiss to [Communist Party leader Leonid] Brezhnev. The people there were shocked.”

In the first game in Moscow, Henderson scored to help Canada take a 4-1 lead, but later suffered a concussion when he was tripped into the boards and knocked unconscious. He returned to finish the game, but the Soviets came back to win, 5-4.

With the team on the verge of losing the series, Henderson scored two game winners to even things up at 3-3-1 heading into Game 8.

“For myself, I expected to play the best hockey game that I could play,” Clarke said. “In a game you have to win, you have to play your best.

“I didn’t have any political opinions. I was only there to play hockey, to help our Canadian team win.”

During the series, Clarke’s line played against the line of the Soviets’ top player, Valeri Kharlamov.

After being on the receiving end of some slashes from Kharlamov, in Game 6 Clarke laid a two-handed slash across his opponent’s ankle and broke it. Though Kharlamov finished the game, he missed the seventh and was largely ineffective in the eighth.

The teams traded power-play goals and the first period ended 2-2. The Soviets scored three in the second period and went to the break with a 5-3 advantage. Esposito scored for the second time 2:27 into the third to cut the disadvantage to 5-4, and Cournoyer tied the game up just past the halfway mark of the third.

Then Henderson scored the winner in the final minute off his own rebound following a pass from Esposito.

“The feeling after we won is hard to describe,” Clarke said. “The way I’d put it is that it was the same emotion as any player that had ever won a Stanley Cup.”

A couple of days later, Team Canada returned on a flight to Montreal, where it was greeted by Prime Minister Pierre Trudeau and 10,000 fans. Later, a crowd of 30,000 jammed Nathan Phillips Square when the players arrived in Toronto.

Henderson’s goal in Game 8 turned him into a national hero. Neither he nor the series will ever be forgotten.

This week, four tickets from the Summit Series, including one from Game 8, were being offered on eBay for $10,000. A program from the final game had an asking price of $1,100.

Henderson has run a Christian ministry out of Toronto since 1985. Today, Leader Impact has chapters in 900 cities and 77 countries.

All these years later, as he makes appearances, he is asked about the goal he scored to do in the Soviets. He achieved a lot but it was the summit of his career.

“I came off the bench at the one-minute mark and less than a half-minute later it was in the net,” he said. “I have been celebrating that sucker ever since.” 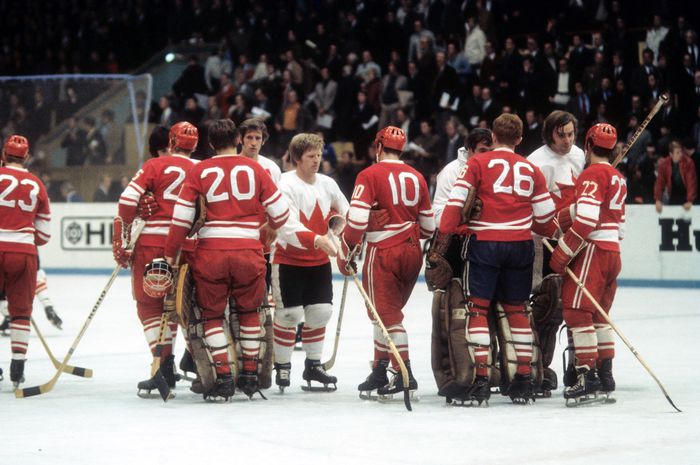 First, Russia’s invasion of Ukraine put a chill on plans to celebrate 1972’s Cold War contest. Then, allegations of sexual assault by players put Hockey Canada in the hot seat. How should Canadians feel about the national game right now?