A logging road winds through the Bugaboo Creek watershed, opening up access to a section of forest that has never been logged. Months ago, the blockades where almost 1,200 people were arrested for protesting against old-growth logging in nearby Fairy Creek came down. Now, some opponents are using this rough backcountry path to look for new avenues to protect these forests.

After hiking up the Bugaboo forest road on a warm September day, Joshua Wright checked his GPS co-ordinates just below the ridge line, then descended down the steep mountainside into the lush, untidy terrain of an old-growth forest.

The 19-year-old environmental activist, a key figure in the Fairy Creek blockades, has spent the past few months visiting these mountains, searching for Oldgrowth Specklebelly lichen. There are only 56 documented findings of this species in Canada. If he can confirm its presence here, he hopes that this one patch of forest, which has been marked by surveyors for logging, will be protected.

British Columbia has been embroiled in conflict over old-growth logging for decades, and the protests that started in Fairy Creek in 2020 led to one of the biggest acts of civil disobedience – measured by the number of arrests – in Canadian history.

The protests targeted logging in Premier John Horgan’s riding. Mr. Horgan’s New Democratic Party government had promised to make conservation of biodiversity and ecosystem health an overarching priority across all resource sectors. Last November, it announced a plan to defer logging in one-third of British Columbia’s rare, old-growth forests that are considered at a very high risk of irreversible biodiversity loss.

However, groups including the Ancient Forest Alliance, Sierra Club BC, Stand.earth and the Wilderness Committee say that old-growth logging in B.C. has not slowed, even in the areas where the government promised to defer harvesting.

When the Fairy Creek blockades ended last June, activists were disheartened that their actions had not produced substantial change, Mr. Wright said. He started searching for a different point of leverage. That brought him to cutblock #4733, near Bugaboo Creek. Here, the alchemy of ocean breezes and ancient yellow cedars combine to create a nutrient-rich climate where Oldgrowth Specklebelly lichen can grow.

About two dozen metres from the logging road, Mr. Wright located his target: a patch of the distinctive pale greenish blue lichen growing amid the moss on the bark of an amabilis fir tree. He has now mapped five host trees in this forest, and has written to the provincial conservation service to document those findings.

“The government knows it is here, and it’s up to them now,” he said in an interview, standing at the base of a towering yellow cedar that stands amid the patches of lichen. “Are they going to follow their own rules, or are they going to bow down to the timber industry?” 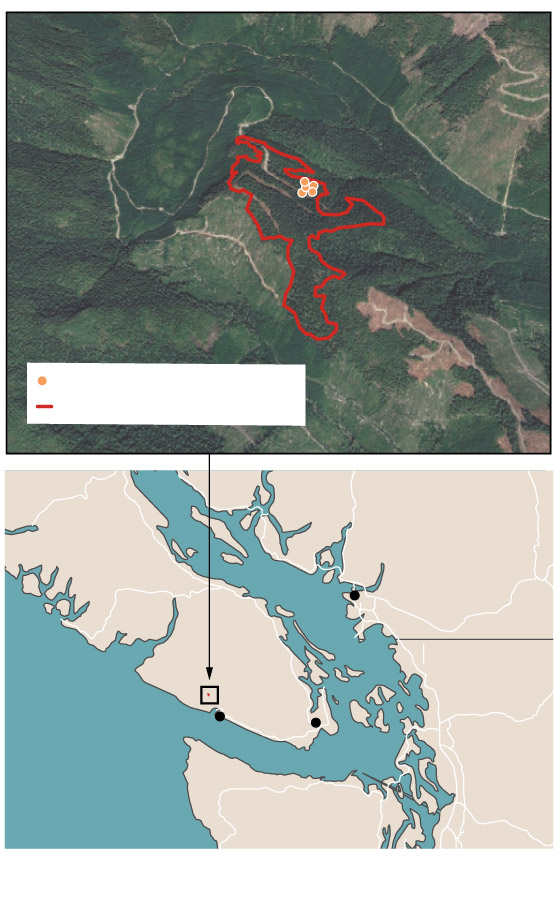 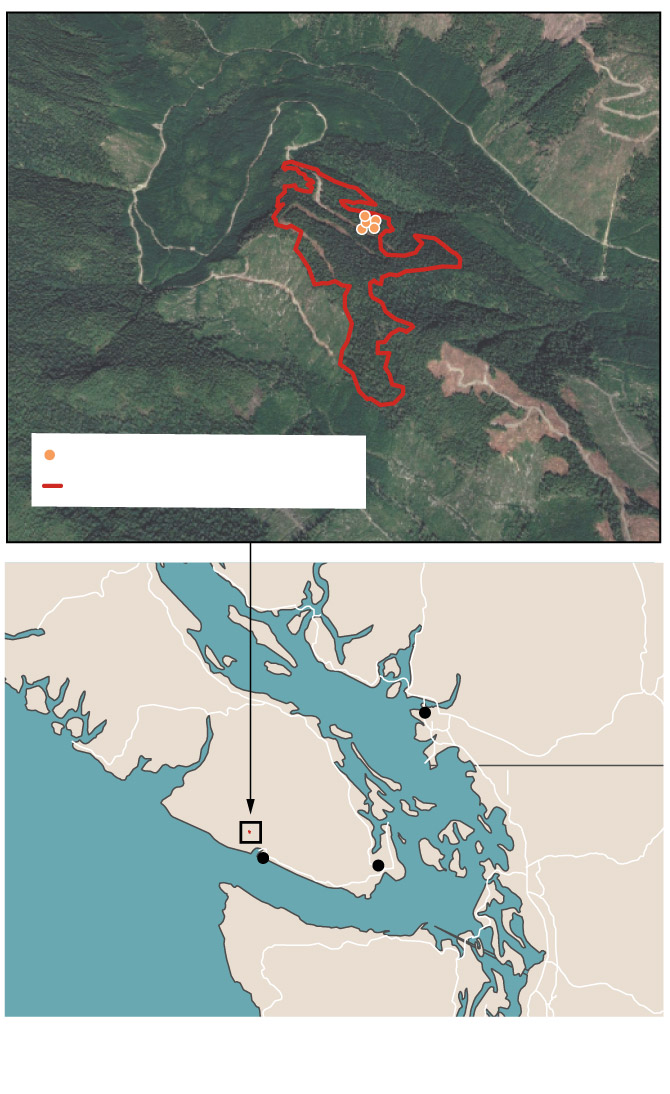 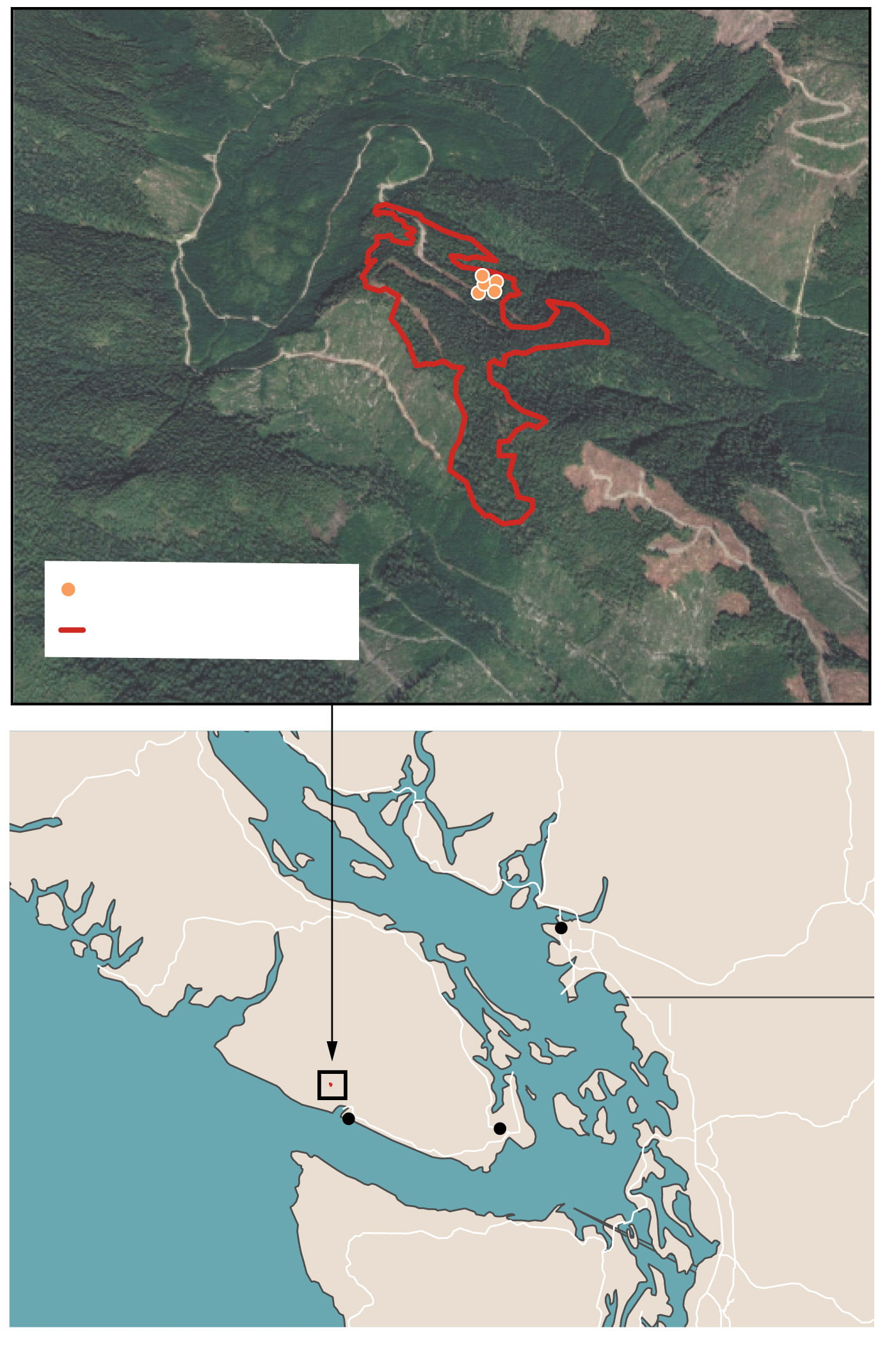 Bugaboo Creek and Fairy Creek are part of a vast coastal rain forest on the west coast of Vancouver Island featuring some of the largest trees in Canada and rare, intact watersheds. These forests are located within Tree Farm Licence 46, which is held by the logging company, Teal-Jones. Additionally, they lie within the traditional territories of the Pacheedaht First Nation.

The Pacheedaht’s leadership has been clear that the logging protests were unwelcome, and earlier this month, the band and Teal-Jones signed a pact to pursue the creation of jobs and training opportunities in forestry with Pacheedaht First Nation members.

The Pacheedaht’s support for logging within its traditional territories has made the Fairy Creek protests contentious in environmental circles. Conservationists who are comfortable opposing corporate and government interests have hesitated to stand in the way of Indigenous rights to govern their lands and resources.

By shifting from blockades to cataloguing endangered species, however, the onus shifts to how government will meet its commitment to biodiversity conservation. A similar tactic was used in 2021 to delay construction of the Trans Mountain pipeline, when birders complained that Anna’s hummingbird nests were being damaged. Environment and Climate Change Canada halted pipeline construction through a forest in Burnaby, B.C., until the end of bird nesting season.

Under the country’s Species at Risk Act, both the federal and provincial government have acknowledged the need to protect Oldgrowth Specklebelly lichen. “The greatest current threat is from logging and wood harvesting. The management goal is to maintain all known extant populations and any future populations of Oldgrowth Specklebelly that may be found in British Columbia,” states Canada’s management plan for the species.

The lichen is listed as a species of special concern, which means that the province requires a conservation plan. But that does not provide any assurance of protection: Forests Minister Katrine Conroy was not available for comment, but in a written statement, her office said there is no legal requirement for protection.

Trevor Goward is the expert who named and catalogued this lichen for the Committee on the Status of Endangered Wildlife in Canada, an independent agency that advises the federal government on which species need protection. He has confirmed Mr. Wright’s find.

“There are 20,000 lichens that live on this planet, there’s nothing that’s quite this colour,” Mr. Goward said in an interview. “It’s like coming upon a unicorn.”

He doesn’t expect many people will worry about the fate of some lichen, no matter how rare. But he says Oldgrowth Specklebelly lichen should be recognized as a marker of a special and endangered ecosystem, one that takes thousands of years to develop.

“It grows in conditions that most lichens could not tolerate. It’s an amazing species in its own right, but who cares about lichen? This is an emblem of our planet’s survival,” Mr. Goward said.

Conrad Browne, director for Indigenous partnership with the Teal-Jones Group, said there are no immediate plans to log in this particular cutblock at Bugaboo Creek, and the company would look for endangered species before filing a harvest plan with the province. Would the presence of a rare species alter those plans? It depends, he said.

“There’s best practices, and there’s also aspirational processes that people have put into different reports, that do not fall into the legal requirements,” he said. The company will develop its logging plans for this cutblock with the Pacheedaht, he said. “We will make sure that we’re doing it the way that the First Nation wants us to, as long as it falls within the legal parameters of forestry.”

The dispute over logging around Fairy Creek has been costly for the company, Mr. Browne said. He would not say if the company has lost customers, but “it’s harmed us on many different levels, from markets, to customers … to our relationship with government.”