The latest: Search-and-rescue crews target mudslide area between Agassiz and Hope after 275 people airlifted from highway

A powerful rain storm has swept across southern British Columbia, unleashing floods and mudslides from Vancouver Island to the Alberta border, trapping motorists, closing major highways and forcing the evacuation of thousands.

Just months after the province suffered under a heat dome that led to extreme temperatures, wildfires and hundreds of deaths, the historic rainfall led to unprecedented flow in rivers, flooding homes and washing out highways on Sunday and Monday.

“We are seeing significant rain-induced incidents such as mudslides and flooding in the southwest and central regions of the province,” Public Safety Minister Mike Farnworth said at a news conference on Monday. “The situation is dynamic, and further rains, high winds and possible snow in areas are compounding the situation.”

Several highways were closed by mudslides, and Chinook helicopters were used on Monday to rescue motorists who had been trapped between two slides since Sunday night on a section of Highway 7 between Agassiz and Hope.

The mudslides occurred just after 8 p.m. on Sunday, appearing to push some vehicles over an embankment and trap others in between.

As darkness fell late Monday afternoon, Captain Gormick said he believed everyone who had been stuck between the two mudslides on Highway 7 had been rescued. On Tuesday, CAN-TF1 and Canadian Armed Forces members will enter the slide zone and begin pulling apart debris with heavy equipment and canine units, he said.

Until then, it won’t be clear if people remain in the debris.

Sonya Foulds and her family were travelling to their home in Aldergrove from Summerland, where they picked up two head of Zebu cattle, when they were trapped between the two landslides. She said they saw other vehicles get caught.

Ms. Foulds, who is eight weeks pregnant, and her husband, Leland Helm, had 80 kilometres worth of fuel when they got stuck. They parked by a rock face, hoping that would shield them from further landslides. They idled their borrowed GMC Denali throughout the night to keep warm. The pair told their two-year-old daughter, Ainsley Helm, they were going to camp out in their truck.

John Korsrud, another driver stuck between the two mudslides, said he was thankful he had been shopping during his weekend visit to his mother’s lakefront home near Merritt in B.C.’s Southern Interior. He said he was glad he had picked up a synthetic chinchilla blanket and box of granola bars on Sunday night.

“It sure came in handy last night because it got quite cold,” Mr. Korsrud, 58, told The Globe and Mail on Monday morning from inside his sedan. “I was able to sleep from midnight to 6 a.m. or so.”

More than 20 emergency operations centres were activated across the southern part of the province due to flooding, while all of Merritt was evacuated on Monday. Southbound lanes of the Coquihalla Highway, a major connection between the Lower Mainland and B.C.’s interior communities, were swept away, raising the prospect of days or weeks of travel disruptions. 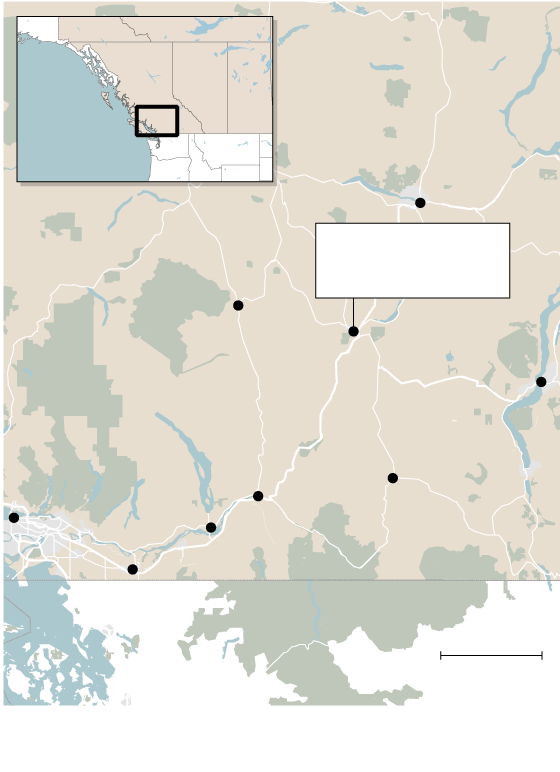 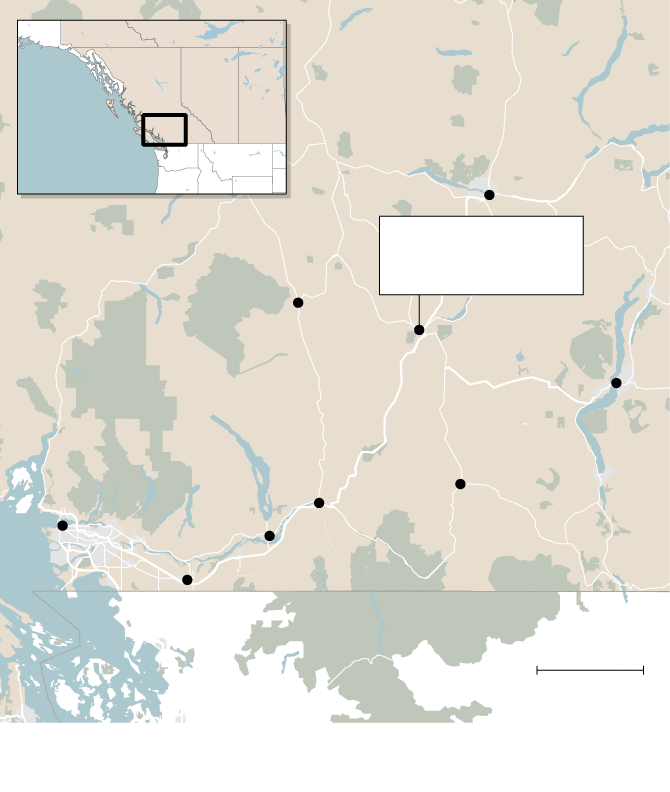 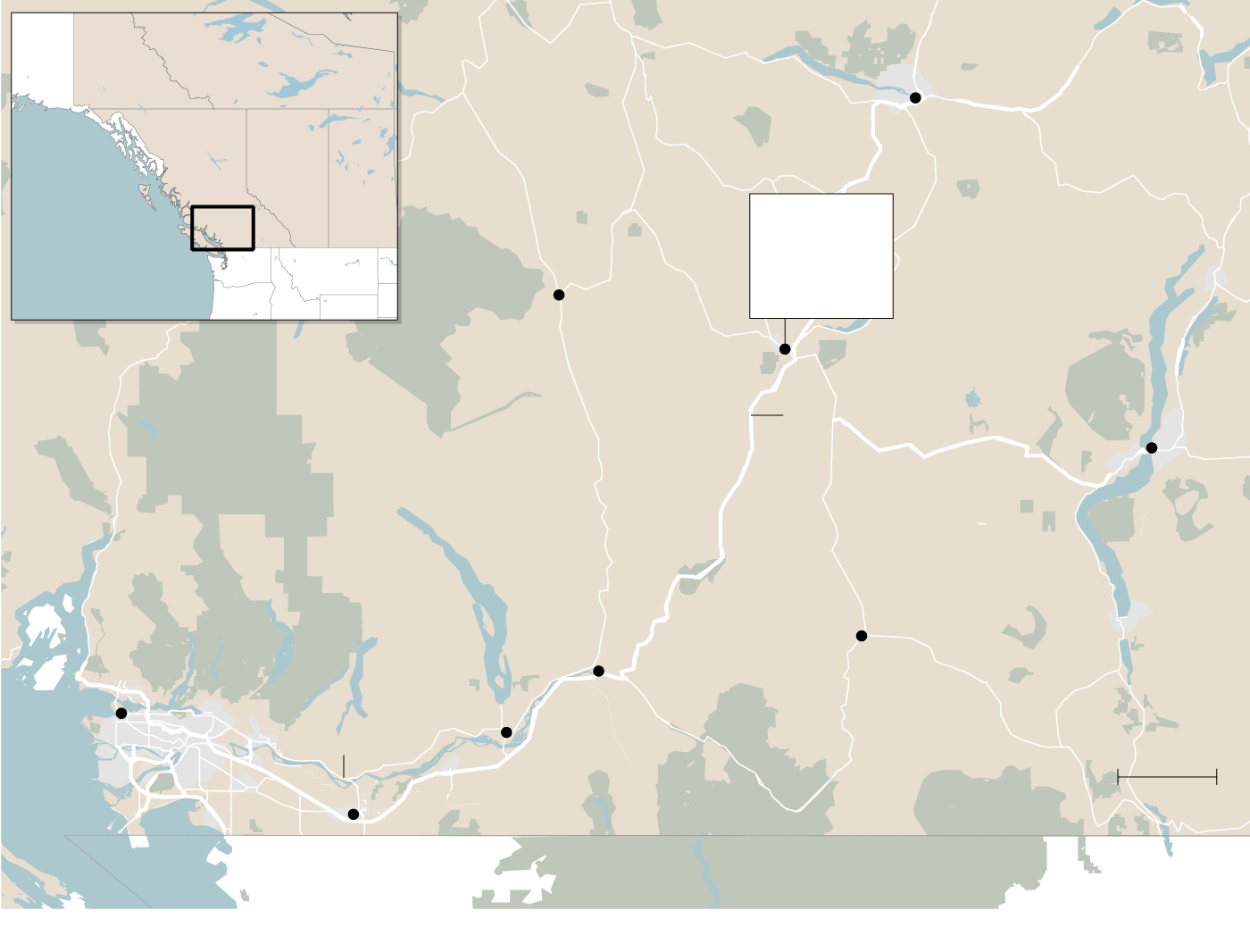 Environment Canada meteorologist Armel Castellan said the province has already had two months of unusually heavy rains when the “very potent and strong” weather system arrived on the weekend. “The conditions … have been historic, with many locations getting an average amount of rain for November in under 48 hours,” he said. The deluge continued on Monday, turning to heavy, wet snow at higher elevations. In addition, much of the South Coast and into the Southwest interior were hit with damaging winds, with gusts of up to 90 kilometres per hour.

Raymond Desjardins was travelling from Kamloops to Vancouver on Sunday afternoon when he learned the Coquihalla was closed and took a detour toward Princeton. Suddenly, the car ahead of him slammed on its brakes and started reversing.

Mr. Desjardins, a 32-year-old mechanical engineer, looked ahead and saw two cars get swept down over an embankment. Mr. Desjardins and others quickly scrambled to assist. A truck with a winch arrived, and Mr. Desjardin says he attached it to his waist and was lowered down the embankment, cautiously retrieving three occupants of the second vehicle one at a time. They were covered in mud and shaken, but otherwise unharmed.

He said he saw other vehicles in the distance and heard people calling for help, but couldn’t approach because he couldn’t discern land from water in the dark.

The Coquihalla corridor received about 200 millimetres of rain overnight, and Mr. Farnworth said he is awaiting geo-technical assessments to determine how long it will take to repair the damage on the highway.

“There have been aircraft out looking at exactly the state of the damage and we need to get the technical reports back from the crews doing that assessment,” he said, before determining if the repairs will take days, or weeks.

The entire City of Merritt. B.C. is being evacuated due to severe flooding after heavy rain. The town of Princeton, 90 kilometres south of Merritt, is also under an evacuation order. Video from the two Interior B.C. communities shows overflowing rivers and flooded streets.

Merritt was evacuated on Monday morning as flood waters inundated two bridges across the Coldwater River and prevented access to the third. The waste water treatment plant has been deemed inoperable for an indefinite period, leaving residents with no sanitation services. Gas stations were asked to remain open to allow residents to fill up their tanks on their way out.

Merritt resident Jared Thomas said a cruel irony of this summer’s disastrous wildfire season is that his family’s evacuation bag was still ready to go on Monday morning when the Coldwater River breached its banks and forced them and their neighbours out.

“Some of the clothes in there won’t be as useful, but we had that at the ready,” he said from a friend’s place in Kamloops. He spent Monday morning glued to the feed of two porch cameras that gave him a live look at the incoming waves. By midday, his floating deck in the backyard had become a “literal floating deck,” and the crawl space filled with baby clothes he and his wife were hoping to hand down from their one-year-old son to his future sibling had been flooded.

He said the water was still below the top of their front porch when the power – and their visual on the situation – cut out. The realtor picked his home because he believed that river rarely floods and, he said with remorse, he even persuaded clients to settle nearby. “I said: ‘You’re going to be okay and it’s going to be alright because the Coldwater River is safe,’” Mr. Thomas said.

Sections of the town of Princeton were also underwater, and resident Chris Stackhouse spent Sunday night trying to fortify the berm dividing his home from the raging Tulameen River. “As fast as the sandbags were going up, the river was eating them,” the tire store employee told The Globe on Monday afternoon.

With his home under an evacuation alert on Monday, Mr. Stackhouse sent his family to a friend’s place higher above the small southern B.C. town and decided to stay the night to see if it and other homes are hit by the surging water.

“Our highways are all flooded out, so we’re stuck – there’s nowhere we can go,” Mr. Stackhouse said of Princeton’s plight.

Emergency officials asked residents across southern British Columbia to avoid travel unless absolutely necessary, with many roads closed across the interior, the Fraser Valley and Vancouver Island.

B.C. Liberal Jackie Tegart, whose riding includes Merritt, Hope and Lytton, said the provincial government needs to take a look at the protocols it uses to let people know about extreme events. She suggested Mr. Farnworth should have been more pro-active in warning communities and travellers on the weekend.

“I think this event was catastrophic enough that the Minister of Safety [could have] stepped out in front on Saturday and said, ‘We are asking everyone to be aware that this is what’s coming, please reconsider your travel plans, please keep your family and friends safe, please check on your neighbours,’” she said. “I think that we can do a better job there.”

In Abbotsford, which declared a local state of emergency and was under several evacuation orders and alerts, entire trees, complete with their root systems, could be seen floating down the fast-moving Fraser River.

At the evacuee reception centre in Agassiz, about 75 people were comforted with food, hot coffee, clothing, pet supplies and colouring books and donated toys for children.

Among the evacuees were Melissa and Cory Lysohirka, who left Sun Peaks with their two children and dog on Sunday morning, taking the Coquihalla Highway until they hit the mudslide. As they turned around, Ms. Lysohirka saw a second one barrelling down the mountain and tried to distract the children.

Ms. Lysohirka said she has been unable to sleep while awaiting pickup from a neighbour. “I saw three landslides in two hours,” she said. “You bet I thought that’s how it was going to end.”

Allison Barton Youssef was one of the motorists stranded by highway closings. She and her husband slept in their car Sunday night in Hope after being diverted when they tried to return to the Lower Mainland from Kelowna. She estimated hundreds of motorists were on the same stretch of road, while a nearby parking lot was filled with commercial trucks that were also stuck.

With the town’s electricity service knocked out, the travellers congregated by a local gas station that had generator power. She said it was cold, but the couple considered themselves lucky to have access to a washroom, and they had packed well. “I’m usually not that prepared, I guess intuition kicked in because I had bought four blankets, snacks and a big jug of water,” she said. The shelves in the nearby convenience store were soon emptied, and the Ricky’s restaurant had to close at midday when it ran out of food.

John Clague, a professor of Earth Science at Simon Fraser University said, it’s concerning that this type of extreme weather will become more common as the climate warms.

“It’s wild. We think about this event is the counterpoint to what we experienced in June with the heat dome, where we had two months without any rain. And here we are, three or four months later, and we’d get more rain in two days than we would normally get in November, all of November,” Dr. Clague said in an interview.

“To me, the counterpoint is amazing. But that’s what happens with climate changes.”

Several courthouses were closed due to flooding and power losses, some ferry services between Vancouver Island and the mainland were suspended due to the high winds. The Trans Mountain pipeline has been shut down temporarily.

Strollers on Vancouver’s seawall were shocked early Monday afternoon by the sight of a large barge drifting through English Bay toward the Burrard Street Bridge and Granville Island. The whitecapping waves eventually pushed the unmarked vessel onto Sunset Beach, where it drew thousands of onlookers, and city workers trying to assess the situation. As of early Monday evening, the vessel was still aground.