A provincial official has told residents in Leamington, Ont., that the government is developing a strategy that could involve legislative changes to deal with the many abandoned oil and gas wells scattered across the region – a year after one was suspected to have caused a massive explosion in nearby Wheatley.

Jennifer Barton, assistant deputy minister of regional operations in Ontario’s Ministry of Natural Resources and Forestry, said Thursday that the province was reviewing its policies in light of the blast last Aug. 26 that destroyed two buildings and injured about 20 people in Wheatley. Both communities sit on the shores of Lake Erie, about an hour southeast of Windsor.

Addressing about 70 Leamington-area residents who attended a town-hall meeting organized by local federal Conservative MP David Epp, Ms. Barton said the province was in the early stages of drafting a “longer-term strategy” to deal with Ontario’s thousands of old oil and gas wells, most of which are in Southwestern Ontario and can date back to the 19th century.

“When things like this happen, we do need to step back and take a look at the legislation we have, and determine whether any changes are needed,” she said. “So, we’ll go through that process.”

Ms. Barton was responding to concerns raised at the meeting by Howard Gabert, a Wheatley resident and chair of the town’s citizen task force on the disaster. He pointed to a recent Globe and Mail investigation of the nearly three months leading up to the explosion that detailed how overwhelmed local fire department and municipal officials repeatedly asked the province for more help after hydrogen sulphide and methane gas was first detected at the site.

Mr. Gabert called this “bureaucratic Ping-Pong.” He blamed Ontario’s legislation, which unlike other provinces, can leave unsuspecting landowners on the hook for leaking wells they find on their property if the original operator is bankrupt, no longer exists, or is unknown.

In other provinces, industry-funded programs cover the costs of properly plugging this kind of “orphan” well, which can run into the hundreds of thousands of dollars. The Ontario government says it spends $1-million to $3-million each year to cap about 20 wells, but many experts say this is not enough – and only certain wells qualify.

Only wells with location information and accuracy higher

than 50 metres are included.

Source:Ministry of Natural Resources and Forestry

Only wells with location information and accuracy higher

than 50 metres are included.

Source:Ministry of Natural Resources and Forestry 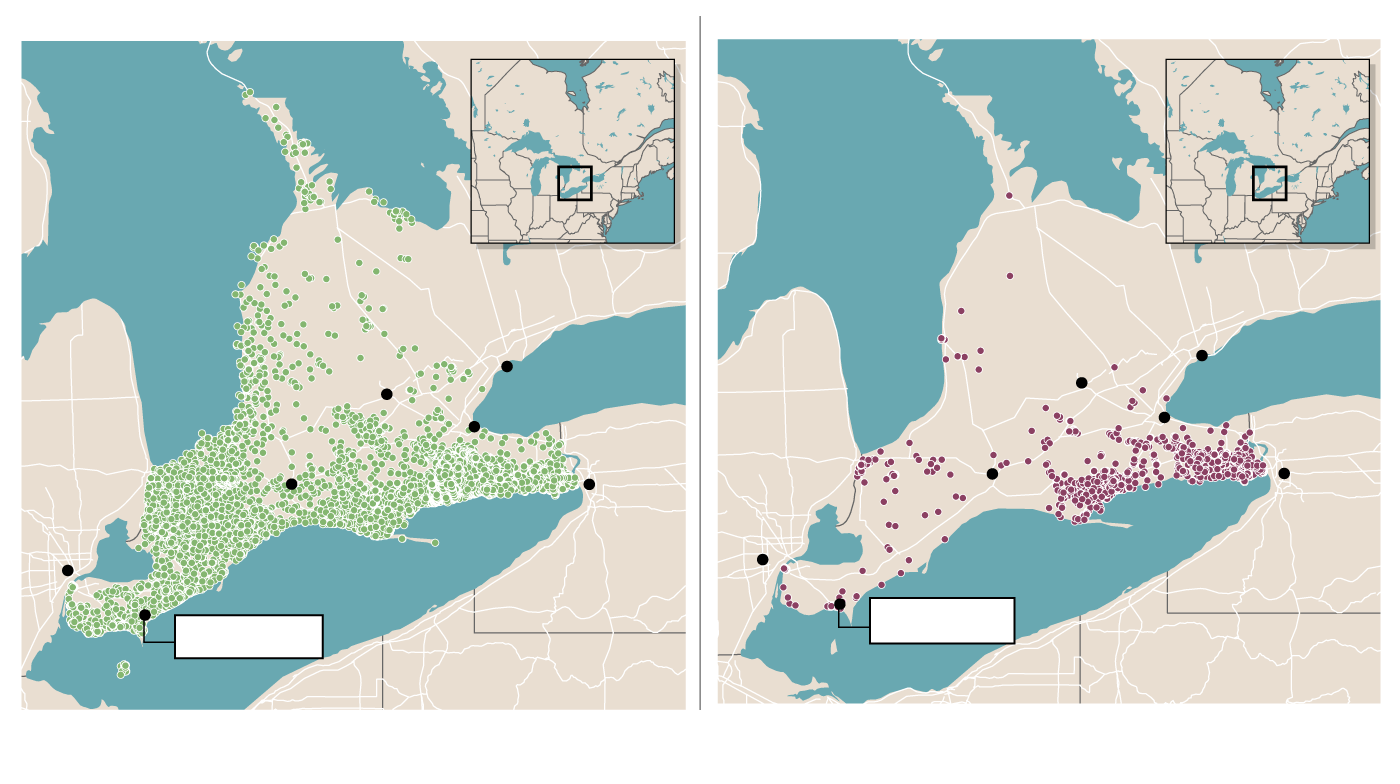 Only wells with location information and accuracy higher than 50 metres are included.

A Globe analysis shows that there are 26,674 oil and gas wells on record in Ontario and more than half have been abandoned, which means they should have been plugged and are no longer in use. Of these, The Globe identified 7,424 potential orphan sites, where there is no record of an operator or an operator filed for insolvency or may no longer exist.

Mr. Gabert said the province needs to start pro-actively hunting down and capping potential problem wells, as well as fund a “response team” that can take over from ill-equipped local fire departments to deal with a Wheatley-style gas leak, as is the case in Alberta and other Western provinces.

“This problem’s not going away,” Mr. Gabert said. “There’s going to be another Wheatley.”

Mr. Epp, the Conservative MP, and Ms. Barton, as well as representatives from a local oil and gas producer, Lagasco Inc., all highlighted Ontario’s unsuccessful efforts to secure some of the $1.7-billion Ottawa pledged in 2020 to help the industry in Western provinces with oil and gas well cleanup.

Ms. Barton said Ontario’s new Minister of Natural Resources and Forestry, Graydon Smith, had just written another letter to the federal government again asking for funding. (Mr. Smith’s office did not provide the letter on Friday.) Mr. Epp, the Conservative MP, urged attendees to sign an online petition asking Ottawa to step up.

Speaking to reporters after the meeting, Mr. Gabert said it should be up to Ontario to clean up its own mess, in its own jurisdiction.

Local Progressive Conservative MPP Trevor Jones, a former Leamington councillor, did not attend the meeting. Mr. Gabert said it was “a little puzzling” that Mr. Jones was not there. But he said his task force had a meeting with him recently. Mr. Jones did not respond to requests for comment.

Ontario’s Natural Resources Minister has declined multiple recent interview requests from The Globe. His office issued a joint statement from him and Mr. Jones on Friday, marking the anniversary of the Wheatley explosion. The statement says “substantial progress” has been made investigating the blast and that of three nearby wells discovered, two have been capped and work continues on the third.

“We continue to stand with the community of Wheatley as they recover from this tragic event,” the statement reads.

Don Shropshire, the chief administrative officer at the Municipality of Chatham-Kent, told The Globe work on that third well could be done within one or two weeks. He expects after that to hear recommendations for next steps, such as installing gas monitoring, but the municipality has not received a detailed plan from the province about what’s going to happen next.

He said numerous government ministries continue to work with Chatham-Kent on the response to the explosion. And he urged the province to consult the town on how to avoid another disaster.

“The mayor and I and our fire chief certainly stepped up and said … we’d be more than happy to contribute to anything that can be done for lessons learned, to either avoid a future event similar to this or support a more effective response,” he said.

The bulk of the recommendations for the town’s next steps and treatment of the explosion site will come from a report from Golder Associates, a consulting firm. It was hired to figure out how gas migrated from where it originated to the former Pogue pub, which exploded a year ago. The firm’s report isn’t yet finished.

Ontario’s Office of the Fire Marshal has completed its own report into the blast. However, the OFM won’t make it public. Spokesman Sean Driscoll said OFM investigation reports “contain sensitive and personal information” and are only be made available after a request under the province’s freedom of information legislation.

The Wheatley explosion heightened concern across the region over potentially leaky wells. But six years ago, just a few minutes from the site of the Leamington meeting, two homes were evacuated after the discovery of leaking hydrogen sulphide gas, bubbling up from the ground.

Local landowners at Thursday’s meeting said they were worried that responsibility for a such a potentially expensive problem could fall to them, even if they had no idea there was a well on their property. Ms. Barton said eligibility for government aid depends on the individual well, and the degree to which it is a public safety risk. Some at the meeting suggested landowners would be less likely to report a problem to the government if they fear being bankrupted by a costly cleanup order.

Much of the meeting focused on practical issues, including accessing the province’s database of known abandoned oil and gas wells. Residents were told to call 911 if they detect the telltale “rotten eggs” smell of gas, and call an expert or the Ministry of Natural Resources and Forestry if they notice a depression in their property or an area where grass won’t grow or vegetation is dying off.

The Decibel: Emma Graney on the Wheatley explosion

Globe energy reporter Emma Graney spoke with The Globe and Mail’s news podcast about what went wrong in Wheatley, and why experts tell her another explosion like it is “all but guaranteed.” Subscribe for more episodes.

Video: What went wrong in Wheatley?

Globe energy reporter Emma Graney spoke with The Globe and Mail’s news podcast about what went wrong in Wheatley, and why experts tell her another explosion like it is “all but guaranteed.” Subscribe for more episodes.

Learn more about last summer's blast in Wheatley, Ont., and how local officials pressed the province repeatedly for help with the gas leaks plaguing their town.