A massive tropical storm bringing hurricane-strength winds, heavy rain and waves that could top 12 metres is bearing down on Atlantic Canada, as residents brace for what some meteorologists say could be one of the most powerful weather systems seen in years.

Hurricane Fiona, the first major storm of the season, is expected to make landfall on Nova Scotia’s eastern shore Saturday morning as authorities across the region prepare for potential flooding, widespread power outages and dangerous driving conditions. It’s forecast to transition into a post-tropical storm as it reaches the Maritimes, growing in scale and covering more territory as it moves north.

“That doesn’t mean it will be any less severe. These post-tropical storms still pack a good punch and can still support hurricane-force winds,” said Ian Hubbard, a meteorologist with the Canadian Hurricane Centre in Dartmouth, N.S. “It’s going to be very, very strong, very impactful.”

Fiona pounded Bermuda with heavy rains and winds Friday as it swept by the island. Authorities in Bermuda opened shelters and closed schools and offices ahead of the storm. 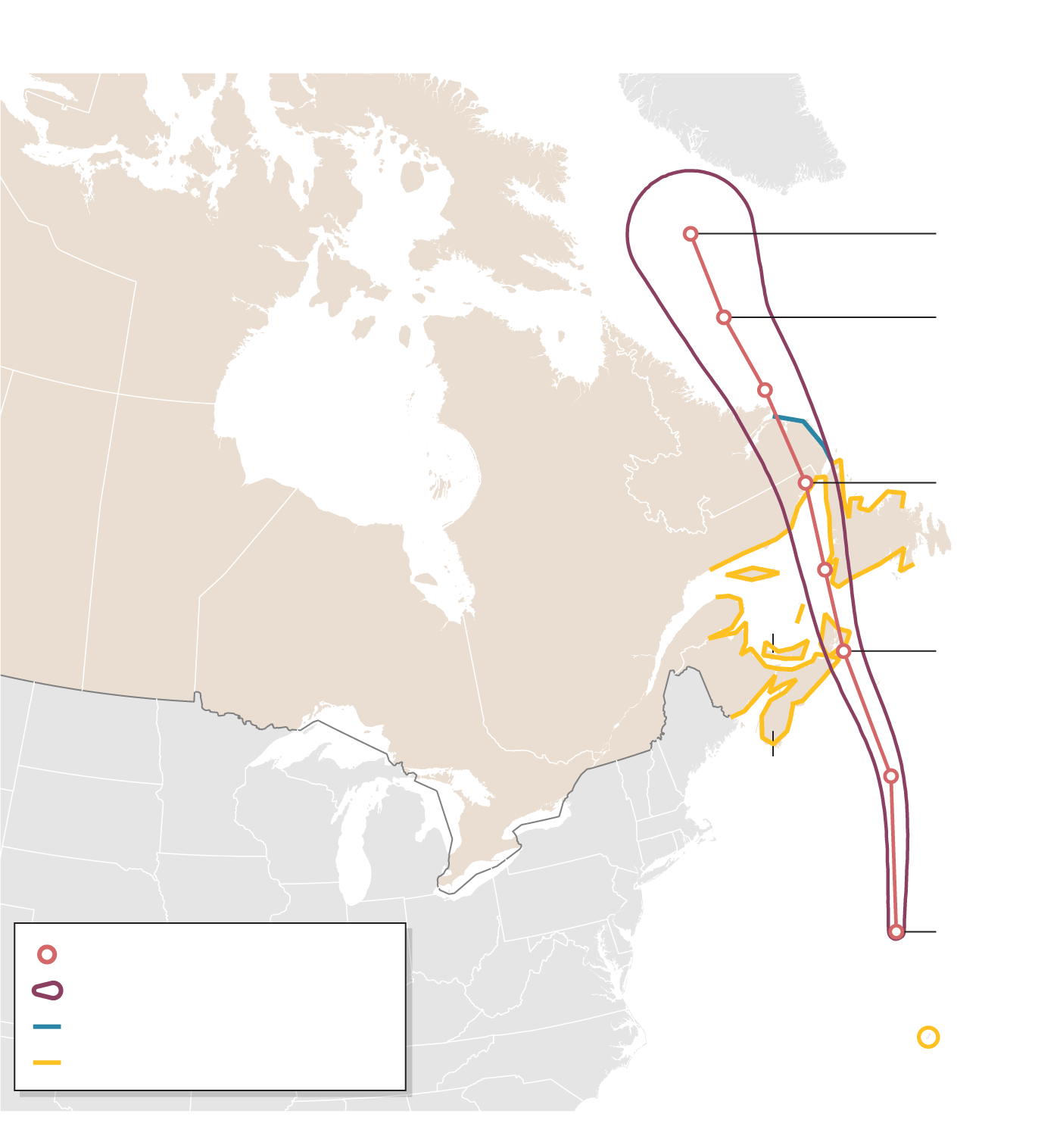 Mr. Hubbard said the centre of the storm is expected to arrive in Canada Saturday morning sometime between 9 am and 10 am locally, but winds and rains will arrive late Friday.

The heart of the storm is expected to pass over eastern mainland Nova Scotia and Cape Breton, but will also bring heavy rain and winds to much of southern and eastern New Brunswick, Prince Edward Island, Newfoundland and Labrador and the Gulf of St. Lawrence. Fiona could bring winds of 100 kilometres per hour, with gusts up to 140 kilometres per hour, and rainfall of 150 millimetres – even as much as 200 millimetres in some coastal areas, he said.

The marine forecast is projecting waves in excess of 10 metres, and possibly above 12 metres as the storm moves closer to Quebec’s eastern shore later on Saturday, Mr. Hubbard said.

How do hurricanes form? A lesson in the science behind the storm

Hurricane Fiona could cause damage, power outages and flooding in East Coast

“It’s important everyone understand this is going to be a very severe storm, and not to take it lightly,” he said. “They need to plan accordingly.”

People live who along Fiona’s projected path were urged to prepare in advance of the storm. Large crowds flocked to grocery stores in the Halifax area Thursday and elsewhere as residents stocked up on food and propane. Officials in New Brunswick told people to prepare emergency kits with enough supplies to last 72 hours.

Dave Buis, vice-commodore of the Northern Yacht Club in North Sydney, N.S., said he is worried about the storm, which is expected to slam the island of Cape Breton.

“Oh definitely, I think this is going to be a bad one,” Buis said in a telephone interview. “Hopefully it will slow up when it hits the cooler water, but it doesn’t sound like it’s going to.”

He said he removed his seven-metre sailboat from the water on Thursday and moved it to a storage area behind the yacht club. Another five boat owners did the same, while others at the club lashed down their boats with extra lines.

“We moved a bunch of piers away from the southeasterly (wind) directions and put them on the other side so they’d be safe,” Buis said. “Everything that was in front of the yacht club needed to be moved.”

Some American meteorologists said modelling suggests Fiona has the potential to be a record-setting storm for Atlantic Canada in terms of its strength. On Thursday afternoon, the storm was about 1,800 kilometres southwest of Halifax with winds of 215 kilometres per hour. It’s projected to be stronger than 2019′s Hurricane Dorian, which prompted coastal evacuations in Nova Scotia and caused tens of millions of dollars in damage.

“It’s hard to overstate the scenario in Atlantic Canada with Fiona,” said meteorologist Bob Henson, on Twitter. “Such a broad model consensus on record-setting storm strength is almost unheard of.”

Nova Scotia Power has said that about 800 utility workers have been positioned in locations around the province in anticipation of outages and damage to power poles.

Amanda McDougall, the mayor of Cape Breton Regional Municipality, said Thursday that officials were preparing a shelter in the Sydney, N.S., area for people to enter before the storm begins. She said emergency planners are concerned that some kinds of older housing won’t be able to withstand the force of the winds.

The Construction Association of Nova Scotia also urged its members to shore up construction sites and building cranes ahead of the storm, warning that buildings under construction would be particularly vulnerable.

“With knowledge that construction and tower crane sites in the province come with some additional risk during these events, we urge you to be diligent to meet all safety precautions,” the association said on its website.

Meanwhile, Bay Ferries announced that it was cancelling its high-speed ferry service between Yarmouth, N.S., and Bar Harbor, Me., on Thursday, Friday and Saturday.

Fiona caused historic flooding when it barrelled through Puerto Rico earlier this week, smashing roads and bridges. It then struck the Dominican Republic and swiped past the Turks and Caicos Islands as it strengthened into a Category 4 storm.

With a report from the Canadian Press and the Associated Press