More than three years after recreational cannabis was legalized in Canada, nearly 100 municipalities across Ontario, Manitoba and British Columbia still outlaw pot shops – and many are unwilling to loosen restrictions.

The result is a striking dichotomy: Some cities are teeming with pot shops, sparking concerns of a bubble, while one town over, there could be zero retail presence. In Toronto, for example, there are about 450 cannabis stores and dozens more retail applications are under review, according to recent figures from the provincial regulator. In nearby Mississauga – the seventh largest city in the country – there are none.

Critics of the uneven retail landscape say it’s slowing the consumer shift to legal vendors – and thereby helping the illicit market to hang on longer.

How Canopy Growth, the star of Canada’s cannabis dreams, fell from grace

As the legal regime was getting under way, Ontario, Manitoba and B.C. gave municipalities the choice to opt out of allowing stores. In Ontario, 66 municipalities fall into that camp, including Oakville, Vaughan and Richmond Hill. Those places are home to about 2.5 million people, or 17 per cent of the province’s population.

Meanwhile, 27 communities in B.C. – a mix of cities, towns and First Nations – do not allow cannabis stores, along with six in Manitoba.

The status quo could persist a while longer in some regions.

In Mississauga, where city councillors have twice rejected cannabis stores, there’s unlikely to be another vote until after a new council is elected this fall, said Mayor Bonnie Crombie.

“This council has since twice voted on this issue, and I wouldn’t bring it forward to them again,” said Ms. Crombie, who’s in favour of the stores. “I don’t have any reason to believe they would change their mind.”

She added: “Our council tends to be very cautious.”

For many local politicians, the sticking point is they want additional powers over the industry. In Ontario, municipalities are not allowed to pass bylaws that distinguish land or building use for cannabis from other kinds of use. Stores can be located anywhere other retail operations are allowed, and municipalities cannot put a cap on the number of stores permitted within their jurisdictions. The sole restriction is that cannabis stores must be at least 150 metres away from schools.

In Whitby, just east of Toronto, that’s not enough. Elected officials would like control over the number of stores, their locations and hours.

“I believe that the decision made was and continues to be the right one for our community,” said Mayor Don Mitchell, adding that the town’s council is not considering opting in.

Other provinces have taken a more flexible approach to regulation.

Some local governments in B.C. have enacted bylaws banning cannabis stores, while others still accept applications, but deny all that that they receive, said Chris Donnelly, a spokesperson for the province’s Ministry of Public Safety and Solicitor-General.

Richmond and Surrey are the largest holdouts in B.C., with a combined population of about 780,000. Still, there are other restrictions. North Vancouver has capped its number of permitted stores to six, with the last of those opening in February. As of the end of 2021, Burnaby had the same cap and limited those to government-run shops.

In Manitoba, the six municipalities that voted in 2018 to ban the local sale of cannabis, including the cities of Steinbach and Winkler, south of Winnipeg, continue their prohibition, said Lisa Hansen, a spokesperson for the province’s Liquor, Gaming and Cannabis Authority.

Saskatchewan also initially gave municipalities the option to opt out, and White City, a town outside Regina, still does not allow cannabis stores within its jurisdiction. The Saskatchewan Liquor and Gaming Authority was not able to confirm whether any other municipalities have remained opted out before time of publication.

Across the border in Alberta, municipalities have more powers than in other provinces to control the approval of cannabis retail stores, including the ability to create bylaws on when legal cannabis can be sold and set distance requirements between stores.

In the Northwest Territories and Yukon, all private retail cannabis stores seeking licences must apply to territorially operated liquor boards, which approve their requests on a per-store basis. In Quebec, New Brunswick, Nova Scotia, Newfoundland and Prince Edward Island, cannabis can only be purchased at stores operated by the provincial government.

To be sure, recreational users who live in retail-free zones have other options. The Ontario Cannabis Store – the Crown agency that is the province’s sole wholesaler – runs a delivery service. Other retailers in Ontario have been allowed to make deliveries since 2020. Packages must be accepted in person by someone 18 or older.

Despite that option, it appears that cannabis users are generally disposed to shopping in stores. Orders through the OCS website represent just 4 per cent of Ontario’s total retail sales.

and places for which there are no data

and places for which there are no data 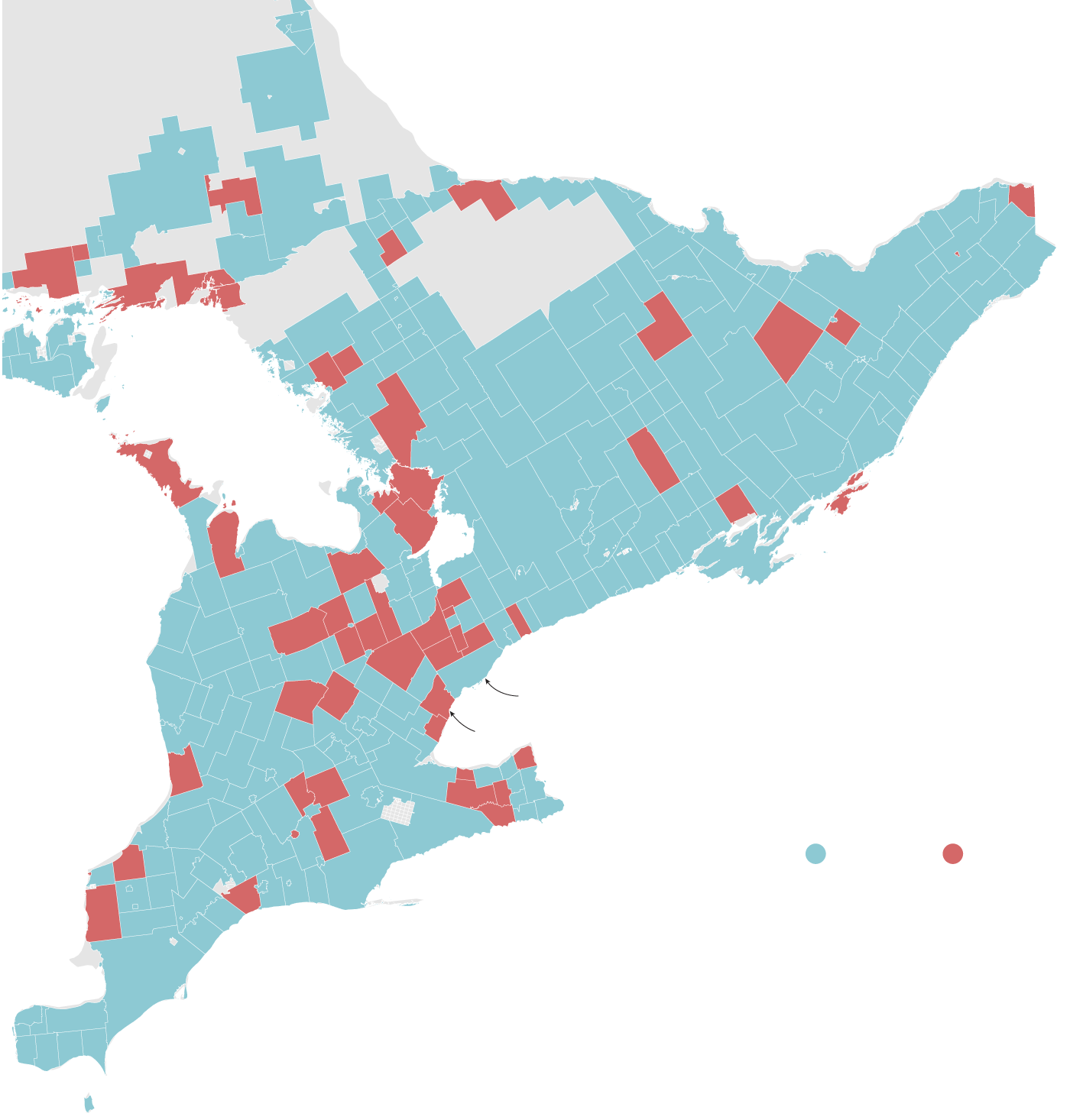 Note: Grey areas include First Nations, provincial and national parks, and places for which there are no data

Some buyers are simply driving to the next city. Raju Saini, owner of Piffingtons Cannabis Co., which has three locations in Southern Ontario, said at least 15 per cent of his sales come from people who live in no-retail zones.

“We do have customers that come from Oakville and Mississauga as they pass through,” said Mr. Saini, whose stores are in Kitchener, Milton and Brampton. “They want us to be their regular supplier.”

Legal operators have been steadily increasing their market share in Ontario, but illegal vendors still capture more than 40 per cent of provincial cannabis sales, according to OCS estimates.

Mobile illegal dispensaries, which often deliver to customers, seem to be flourishing. A 2021 report, prepared for the Peel Police Services Board, said there were between 100 and 150 of those dispensaries in the area. (Peel Region includes Mississauga, where cannabis shops are prohibited, and Brampton, where they are not.)

“People are still consuming cannabis,” said Omar Khan, a senior vice-president at cannabis retailer High Tide Inc. and former chief of staff to the Ontario Minister of Health and Long-Term Care. “If they don’t have access to legal and regulated products, they will have access to unregulated illegal products.”

There is, however, some debate over the extent to which the legal market can drive out illegal sellers. Toronto, despite its high concentration of legal shops, is bustling with mobile illegal dispensaries. Those sellers have a distinct advantage: They can sell cheaper and more potent pot than legal vendors, and many have branched out to other psychoactive products, such as psilocybin mushrooms.

Of the illegal dealers he speaks to, “almost without exception, they haven’t really noticed any drop-off in business,” he said. “People don’t change their habits that much.”

Prof. Lester said larger regulatory changes – such as removing limits on drug potency – are needed to grow the legal market’s share of cannabis sales. Indeed, marijuana producers have called on the federal government to scrap limits and to reduce excise taxes that are hindering their ability to compete on cost.

Despite their initial reservations, 11 municipalities in Ontario have switched course and decided to allow cannabis stories. It’s a significant move: Once a city opts in, it can’t opt out.

Lakeshore, a town near Windsor, made that choice in 2020 after public consultations and observing the rollout in nearby areas. Now, Lakeshore has four stores serving a population of just over 40,000.

Mayor Tom Bain said the town would still like greater powers – in particular, over shop distances to schools – but acknowledged the challenge in providing too much freedom to cities.

“I could see a lot of problems if there was too much individuality between the municipalities,” he said. “Some could totally look the other way, and some could overregulate and make everything very difficult.”

Sean O’Meara, a councillor in Oakville, has pushed for cannabis stores, but found no support from his fellow council members.

Cannabis is “legal in Canada, so I’m still not exactly sure why we’re not allowing it in Oakville,” he said.

Pointing to nearby Burlington, he said the presence of cannabis shops “hasn’t changed the fabric of that community one iota.”